The following account, written by Mr David Jepson, Dean of the St John's Orthodox Academy in San Francisco, was forwarded to me by email:

On Saturday night (March 15, 2008) I got home from choir practice rather late, and stayed up much later than normal as I had a very late dinner. I had finished eating and was reading a book at about 11:30 p.m. when my roommate came in and asked if I knew why the Cathedral bells were ringing. He had been in his bedroom, which like mine faces the street and has a view of the Cathedral a block away. In the kitchen, a couple of rooms away, I couldn't hear the bells, but I agreed that it seemed strange for them to be ringing at that time of night. I went to bed about a half hour later and thought nothing more about it. At church on Sunday, we were all shocked to hear that Metropolitan Laurus, the leader of the Russian Church Outside Russia, had reposed. Our priest got a telephone call from a former parishioner just before the service started at 9.00 a.m.

We heard about the chronology of events later on Sunday from the matushka of one of the Cathedral priests, whose son is at the Seminary in NY. Sometime on Sunday morning, when Metropolitan Laurus was noticed to be absent, someone went to his house and discovered that he had reposed in his sleep. The police were called etc., and people there began notifying the rest of the world. No one here in SF knew about it until 8.00 or so on Sunday morning (11.00 a.m. New York time). As the day went on, word about his death continued to spread. People here were discussing going to the funeral in NY on Friday.

As we talked about these events, the issue of the bells came up.! Others living near the Cathedral had heard the bells ringing late on Saturday night. When they came to the early service at the Cathedral (it starts at 7.30 a.m.), they found the bells tied up in the normal way, which seemed puzzling. Someone had to have gotten into the locked place where the bells are untied them, rung them (very beautifully, my roommate said), and tied them back up, all in the darkness of near midnight. No one in the group I was talking to, which included the wives of both Cathedral priests, knew who could have done it. But then as we were talking, we also learned that the NY police estimated that Metropolitan Laurus had died between 2.00 and 3.00 a.m. That's between 11.00 p.m. and 12.00 midnight here. And then everything seemed obvious.

"I attest that I had just begun reading the pre-communion canons when I heard bells....Orthodox Bells...ringing with the melodies familiar to us at the Cathedral. I first thought it was my CD player...when I checked, I found that it was off. David was reading in the kitchen and I went and asked him if he was playing music. We weren't. Others in the vicinity heard the bells at the same time, roughly the time when Vladyka Metropolitan passed away."

(Note the bells are behind two locked security gates and everyone who has access and who knows how to properly ring the bells have all sworn that they did not ring them).

His Eminence Archbishop Kyrill told us that the bells had been rung by the angels. 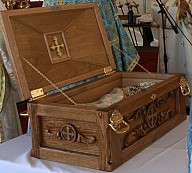 MIRACLE OF ST. MARINA - A few years ago, a family from Lemessos, Cyprus, named Vassiliou received the following miracle. In Greece they are well known from the televised requests they made in order to find a donor for their young boy Andrea, who suffered from leukemia. The donor was indeed found and the parents began preparing for their trip to Texas, U.S.A where the bone marrow transplant was going to be performed. Meanwhile, they also prayed and begged Jesus Christ to save their boy. Before they left for the U.S.A the parents heard of St. Marina's miracles and they called the monastery of St. Marina located on the island of Andros in Greece to ask for Her blessing. The Elder of the monastery, Archimandrite Fr. Cyprianos promised that he would pray to St. Marina. He also wished the parents for St. Marina to be with Andrea in the operating room, to help him. With Elder Cyprianos' blessing and with strong faith that St. Marina would help indeed, the Vassiliou family went to the U.S.A. After the necessary pre-operation tests that Andrea had to undergo, he was taken to the operating room. A short time before the operation was to begin, a woman came to see the surgeon who would be operating on Andrea. She said that she was Andrea's doctor and asked to be allowed to observe the operation.

The conversation that ensued proved that the woman was indeed a doctor. However, the surgeon replied that 'outside' doctors were not permitted to be present in the operating room and that his medical teams' policy was that no doctor other than those on the team be involved in such delicate operations. The persistence of the woman however, convinced the surgeon to allow her in the operating room. But before, he asked her to leave her coordinates at the administration desk. The unknown doctor did as told and then entered the operating room with the surgeon. During the operation, she gave several directions regarding the progress of the procedure. The operation went well and in the end the surgeon thanked the woman and exited the operating room. Andrea's parents immediately went to inquire about the outcome of the surgery and the surgeon replied that all had gone very well, adding that he could not understand why they had brought Andrea to him when they had such a fine doctor. The parents were surprised and responded that they had not brought any doctor with them. The surgeon insisted however. He also told them that when he came out of the operating room Andrea's doctor had remained there for a little longer with the rest of the operating team and therefore, she would probably still be around. He recommended that they look for her. The search however, proved pointless as the 'woman doctor' was nowhere around. The Vassiliou couple then concluded that it must have been a doctor from Greece or Cyprus who had decided to travel to the U.S.A and contribute to the delicate operation. They expressed the wish to know who she was so that they may be able to thank her, and at the surgeon's recommendation they then went to the administration desk to ask for her coordinates. It was with utter surprise that they read that the unknown woman had signed with the name "Marina from Andros". Tears of gratefulness and joy filled their eyes as they recalled that the Elder at the monastery had said to them that he wished Andrea to have St. Marina in the operating room to help him.

Andrea's parents shared with the media their joy both for the successful operation and Andrea's recovered health and for the miracle they received. The Vassiliou family made the vow that the entire family will be present at the saint's monastery every year on the saint's feast day (July 17) and Elder Cyprianos reports that the family has been making the annual trip from Lemessos to Andros every summer to thank Saint Marina for saving Andrea.

Miracles performed by the saints have never ceased to take place in the Orthodox Church. With these miracles, may our Lord Jesus Christ help us build our faith.

August 25 2007: "A MIRACLE STOPPED THE FIRES AT OUR GREEK OLD CALENDAR MONASTERY DURING THE FIRES IN GREECE!" reports Sister Syngletiki of the GOC/Bishop Niphon Jurisdiction, formerly of the GOC-Makarios Synod. "Aghia Skepi Monastery," where Bishop Niphon resides, had to do battle with the spreading fires and prayer was their secret weapon!" Sister Syngletiki told CHURCH NEWS.

The news stories of the fires in Greece have left the following story out of their reports. But CHURCH NEWS presents the "untold" story. Here is Sister Syngletiki's report: "At Aghia Skepi Monastery, which is in a village outside of Athens, the fires had reached the front wall of the Monastery. The fathers were unable to put it out, and decided to perform the service of Litia.

"With a piece of the Precious Cross they went around the Monastery chanting the prayers. They said that the fire literally jumped from one side of the Monastery to the other side and left, without ever burning anyone or the Monastery!

"At St. Marina women's Monastery nearby, the fires had completely surrounded the Monastery, and after they performed the service the fires totally died out. These are truly miracles, especially because of the intensity of these fires!" With love in Christ, Sister Syngletiki."
CHILDREN TO THE CHILDLESS: This story, well-known to people of Southern Greece, involved a woman from Athens who, unable to bear a child, came to the monastery and asked for a piece of the myrrh-soaked cotton to take home. Instead of anointing herself with it, she prayed and swallowed the cotton. Within a short time she conceived, to the great joy of herself and her husband. When the child was born nine months later, the doctor noticed something in the baby’s hand, and opening it up, found the still fragrant myrrh-soaked cotton. The miracle was reported in the Athens newspapers and the woman herself testified to it in an affidavit to Archimandrite Dorotheos.
-Excerpted from “Evlogeite! A Pilgrims’s Guide to Greece”, Mother Nectaria McNees (St. Nicholas Church, Andros, Greece: The Miraculous “Root of Jesse Icon”)

The Holy Flame has descended upon Jerusalem! 2007 footage